Those of you that have been Facebook friends with me for more than 365 days have heard this story before, and are used to seeing it in the form of a lengthy, emotional Facebook post. Since the purpose of my annual post (and me sharing my story in general) has always been to A) raise awareness about mental health and B) show people that you never know what people are battling on the inside, I decided I’d use my blog to try to expand the reach of my story.

Opening up is scary, but it’s also a huge relief.

You are enough. You are so enough. It is unbelievable how enough you are.

When I was 16, you couldn’t have gotten me to hear those words no matter how hard you tried. I hated myself. I’ve struggled with depression and anxiety for honestly as long as I can remember. It made life really difficult for me, especially on top of the stress of high school. I struggled with self-harm for awhile. It was bad.

What makes today so significant? This day six years ago was one of the worst days of my life. On March 26, 2012, I decided that I didn’t want to live anymore. I made the decision that night to take my own life so I didn’t have to deal with the pain anymore. I’d worked out the details in my head, and turned to self-harm in the meantime to hold myself over.

That’s how bad I was: To hold myself over.

Thankfully, my mom found me in my room before anything too bad could happen, and about an hour later I was in the car with my parents on the way to Community North Hospital to stay in their teen psychiatric ward for a few days.

Even though I was only in there for a few days (I was focused on recovery and the doctors described me to my parents as “one of the most compliant patients they’d ever seen”) it was a terrifying experience that still haunts me to this day. My triggers from it are less severe, but I’d be lying if I said I didn’t still panic a little when I get a hospital bracelet put on me (don’t even get me started about the smell of hospitals).

Why am I talking about this publicly though? Well I want to start by saying that I don’t want anybody feeling sorry for me (Very important, I don’t want pity). I simply think that education about mental illness is extremely important, and it will be easier to talk about the less we make it into some giant taboo. I don’t want people thinking I’m weak for what I’ve gone through and what I struggle with; I want those in similar situations to know that it can, and it will get better. In fact, here’s some great things from the past six years of my life that I almost missed out on:

I finished high school with fond memories. Would I go back to high school? Absolutely not, but I got to student direct a musical and have a leading role in a play. I survived a class that challenged me more than any class I took in college. I made friends that I still talk to today. 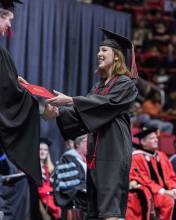 I graduated from Ball State–a semester early. I had some major mental health lows during my time at Ball State, yet I still managed to graduate in December 2017, a semester early. During my time at Ball State, I had the privilege of being a part of Cardinal Communications, which even interviewing for was a huge step. I also served as the PRSSA secretary for Ball State’s chapter and even attended the PRSSA 2016 National Conference.

I’ve been working with kids while on the job hunt. I know my last blog was about how I’ve been substitute teaching, but I’ve also been working with the Just Be Kind Club that started here in Plainfield. I’ve learned so much from these kids I spend time with (and I like to think I teach them something too) and all of them are truly a light in my life.

I had an internship that I loved. If you know me personally, you know you can’t get through a conversation with me without hearing about my time at Hoosier Park. I applied knowing nothing about horse racing and fell in love with the sport during my eight months there. I made lifelong friends and I know I’ll truly never forget my time there.

Saint Susanna, my church, has always been another home for me, and leading retreats has always been something I’ve loved to do. Something about leading as an adult (okay I was really a college leader up until this most recent retreat, but I always felt like I was treated like an adult) really made the experience more fulfilling and I felt like my eyes were opened to more of what was going on.

I’ve learned to love myself. I’ve always considered myself an acquired taste; You have to spend a bit of time with me to realize that you like me. But I’m comfortable in my own skin (most of the time) and I’ve learned to love me for me. I surprised myself when I ended my last relationship, because I had put all of my worth into being with somebody. I’ve learned that it’s okay to be alone, and it’s almost more fun. I also discovered the “You Are Enough” quote from Sierra Boggess, which has been huge in my recovery process and even in my life as a whole.

There are so many more great things that have happened, but I think these are the big ones. Would I like to say that I’ve been perfect and say I’ve never had self-harm relapses or thought about suicide in the past five years? It would be nice, but I’d be lying. It has been over a year since I’ve last hurt myself, though, because this past summer I really started listening to my counselor about how to manage my mental health.

Again, I don’t want people feeling sorry for me. I just want to stop the stigma about mental illness, and also I want people to know that they are not alone. If you or someone you know is struggling, needs someone to talk to, or has any questions about anything I’ve talked about, please don’t hesitate to reach out to me. Having a support system for things like this is important, and I don’t want ANYONE feeling alone like I did.

So now again, everybody say it with me:
YOU ARE ENOUGH.
YOU ARE SO ENOUGH.
IT IS UNBELIEVABLE HOW ENOUGH YOU ARE.

If you or someone you know is struggling, there are options. The suicide prevention lifeline is 1-800-273-8255, or if you’d prefer to text someone instead of call, you can text CONNECT to 741741. You don’t have to go through this alone. There are always people that will listen to you.