Continuing on with using Sierra Boggess’s words of the month for blog prompts, her word for July was “support,” and truthfully, that didn’t mean too much to me when I looked at the email and the blog post at the beginning of the month. I must have jinxed myself, though, as my July quickly turned into one big lesson for what support really means.

July started with an event that ended up being a lesson in support in many ways. I wanted to jump in and support those that I love 100% and give my all, but quickly learned that it was a situation where I would become a risk to myself if I did. This brought on a whirlwind of guilt, sadness, grief and so many other emotions I couldn’t even put a name to. Every part of it was devastating. In that, though, I learned I have more people in my life that understand my story and my brain (and what a task that is) who knew I wasn’t being selfish–I was being careful. I learned that by simply sending out love, I can be supportive. That was new for me, as I’ve always tried to be a “fixer.”

July also taught me that I can choose who I depend on for support. This month really showed me that sometimes people that have only recently come into my life can be more supportive than people that are supposed to be there all the time. I’m so grateful for the people I’ve met in this past year because they’ve proven to be some of the greatest people and I truly don’t know what I would do without them. 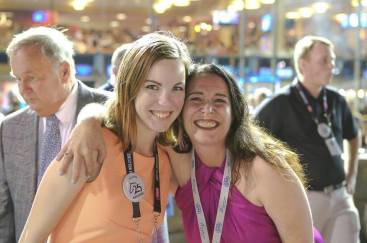 Moving onto August, the word for the month was “flourish” which, as usual, seemed to fit perfectly. August holds the year’s signature event at work, and I felt like that gave me a good opportunity to flourish at work and show what I was capable of. In only a couple short weeks, I learned so much about planning and executing a large event and took charge of some of the smaller components.

In August I’ve also been putting myself out there a little bit more, which has helped my confidence in ways I can’t even explain. I’ve been pretty shy and introverted my entire life so this has been a big step for me. I’ve also been getting settled into my new apartment, and navigating being a real adult for the first time, which has been a truly exciting journey.

I’m excited to see what September holds for me, as I woke up to an email saying September’s word is “renew.” As always, I’m looking forward to the lessons I’ll learn as time goes on.

Rose Flood graduated from Ball State university in 2017 with a degree in Public Relations. She now works in the beauty department at Nordstrom. All thoughts and opinions are her own and do not reflect any brand as a whole. View all posts by roseflood95